Owners of a Newport Beach wig company help their clients, who have often endured a trauma, find a sense of normality. Rhea Mahbubani wrote a feature article about Compassionate Creations for Orange County Newspaper, The Daily Pilot, on November 29, 2013. 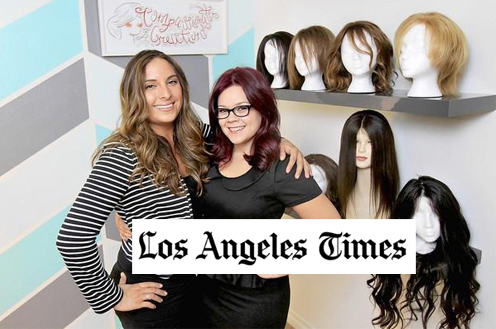 Sandra Everett remembers the first time it happened. She was 13. While seated in a class — although she can’t recall which one — she experienced irritation on her scalp.
While attempting to stay attentive, she reached up to massage her head. But one yank and out came a clump of dark hair. And so it began.

Today, 15 years later, Everett suffers from full-blown Trichotillomania, the compulsion to pull on hair, sometimes on places other than the head, until the strands break. The urge didn’t decrease even as her tresses began to thin.

“I compare it to any bad habit, like smoking or alcoholism,” said the Westminster resident. “I use it as a coping mechanism for whenever something comes up that’s difficult for me.”
Everett relied on her disorder, like some might resort to biting their nails, while dealing with the stress of moving away from home and attending nursing school. It’s also what connected her to Veronica Balch and Gieselle Blair, co-founders of the Newport Beach-based wig company Compassionate Creations.

Although their business is still in its infancy — it was launched in August — the duo met more than a year ago as colleagues at the now-defunct Wiggin Out Salon on Newport Boulevard. This new partnership enables Blair, a wig artist who handles measurements and alterations, and Balch, a cosmetologist who oversees the hairpieces’ cuts, color and styling, to continue helping people.

Their customers include cancer patients who are on the verge of or have already begun chemotherapy and sufferers of Alopecia areata, Trichotillomania and other problems that hamper hair growth.

The duo offer custom-designed, hand-crafted human hair wigs to people regardless of whether their hair loss is genetic or triggered by medical treatment. They have also enlisted the help of experienced and professional wig makers, some of whom work on Broadway and in Hollywood and Las Vegas, to revitalize clients’ confidence and self-esteem.

“There are a lot of junky places that don’t make sure your wigs fit you or your lifestyle,” said Blair, 28, of Long Beach. “For us, it’s not just about the hair piece. We check in on our clients and make sure they’re doing OK. The hairpiece is one component in a bigger puzzle.”
Many who reach out are in the throes of a traumatic experience, she added. All they want is to go to work and drop their kids off at school without giving passersby reasons to stare. At the core of it, these people simply want to look and feel normal.

Seven ounces of hair are needed for each wig, Blair said. Since hair starts to fall out one to two weeks after chemotherapy, she discourages clients from waiting. They can’t pick up hair from the shower floor and use it in the creation of the wig. Instead, clients are asked to divide their hair into multiple ponytails and cut it where it’s tied.

“That way we know the hair’s cuticle direction,” she explained. “We don’t want to tie the wrong end of the hair into the wig. Otherwise, it will tangle easily.”

If the hair, once weighed, does not meet the requirement, clients have the option of asking friends and family to donate hair, or surplus from Compassionate Creations can be purchased. Balch and Blair, who have met interested customers in their homes and in hospital rooms and left pamphlets in oncology centers, also ensure that the hair is a close match in terms of color and texture.

Although the process sounds simple, it is anything but easy for those affected. Balch, 24, who often shaves clients’ heads, calls losing one’s hair a “heart-wrenching experience,” especially for women.

“We laugh together, we cry together, and I try to make it as positive an experience as possible,” she said. “I encourage them to bring their families, pets, best friends or champagne. I tell them, ‘Shaving your hair is hard, but it’s best decision you’ve ever made.’

“You don’t get to make choices when your hair falls out, and people feel more powerful and in control when they’re able to make a decision as opposed to just letting something happen to them.”

Even once they’re seated in the styling chair, Balch, of Newport Beach, takes it slow. The customers retain a firm grip on the proverbial reins. If they change their minds, she stops.
“Some want to look at themselves in the mirror, some don’t want to. Some want a wig, some don’t. Some hate it, some love it,” she said. Either way, she feels honored that clients have chosen to share such an intimate moment with her.

An aspect Blair refuses to compromise on is the fact that every wig is made in the United States. She doesn’t want to tell an already distraught person that the hair has been stolen or lost en route to China, where a majority of wigs are constructed. This adds to the cost of Compassionate Creations’ services, but she finds that it doesn’t upset people — if anything, they feel reassured.

She also combs through eBay and Craigslist in search of people selling their hair. There is a hierarchy even in this industry, she remarked, with virgin blond, red and curly hair available at a premium.

When asked about the most expensive locks she’s purchased, Blair replied, “$500 for seven ounces of red curly hair.”

Once the cap has been made and clients are summoned for final fittings, they get to have some fun with Balch.

Toting pictures of themselves when they were at their happiest, customers guide the styling process, which can last up to two hours.

Balch adds layers and bangs and cuts the hair as requested, pausing in between so clients can shake, comb or part the hair and see how they feel.

See examples of our work

Fill out the form below
to arrange your free consulation